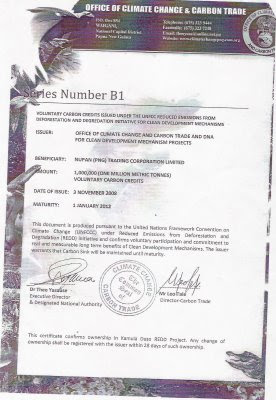 This is a piece of paper that I refer to as the Kamula Doso REDD credit, which is part of a "B" series of credits issued from the Office of Climate Change in Papua New Guinea.

To everyday folk, it looks like it might represent that a certain amount of carbon had been verified as having been stored and verified by the government. Of course, it is well known that all sorts of odd carbon credits are traded on the voluntary market these days, what is peculiar about this certificate is that it claims to have been produced for what is intended to be the mandatory market. It says "pursuant to the United Nations Framework Convention on Climate Change under Reduced Emissions from Deforestation and Degradation (REDD) Initiative".

One problem with this piece of paper is that there is no legal framework for an actual REDD credit to exist. Anyone who knows anything about carbon trading says that this credit cannot possibly exist, because nobody has agreed a framework for this particular type of trade. But then there are many things about this document which are irregular.

I emailed Theo Yasause, executive director of the Office of Climate Change and one of those whose signature appears on the credit (and whose email address in the header). He wrote back:

"Kirks Roberst of NUPAN PNG have been working with the landowners of Kumula Doso and made representation to my Office.

We issued an Interim copy of the Certificate dated 3 Nov 08 on the basis that they will undertake wide stakeholder consultation covering all landowners, provincial and local government before such project can be entertained. The Original Certificate was kept in my Office but someone took that out and leaked it out on circulation. No documentation were submitted with proof that consultation were undertaken and the people are happy with possible carbon trade.

We have since ceased dealing with NUPAN as all landowners are not involved nor does the provincial and local governments in that area. We have stop any direct links with NUPAN since 3rd February. Forestry and ourselves were stoped by Court no to log or undertake carbon trade.

The credits in question were not sold or given to anyone as yet. This is because no Project Documentation were submitted to my satisfaction which would than be submitted to VCS for verifying.

Furthermore, there is a Court Injunction, in place and any dealing will be in contempt of court. Therefore, we have ceased dealing at this stage. from my side no credits were sold nor bought by anyone. Nor have the Office benefited in anyway. "

Mr Yasause mentions another reason why the Kamula Doso credit caused such outrage. The forest is the subject of a court injunction. Until a long-running ownership dispute is settled, nobody can buy or sell anything to do with the forest.

I have not been able to speak with Kirk Roberts, as he is travelling in Indonesia. But for a brief period, Kirk Roberts permitted the Australian carbon management company Carbon Planet to respond to questions about Carbon Planet's role with the Kamula Doso project, and a number of other similar projects.

Jim Johnson, of Carbon Planet, said, "there are in existence a group of certificates issued by OCC to Nupan for Kamula Doso. They are not real certificates. They are symbolic to the fact that Nupan is recognised by OCC as rightful developer to the landowners of Kamula Doso".

Carbon Planet's job is to help develop the Kamula Doso forest into a REDD carbon trade project for Nupan. Over $1.2m (AUS) in project finance was provided for this, and a number of other similar projects, around Papua New Guinea.

This is not unusual. All over the tropical forests of the world, entrepreneurs are doing deals with landowners over the rights to the carbon in their trees. They are speculating that a REDD deal will be done in Copenhagen, and that the value of the carbon will increase when it can become part of the global mandatory market.

Indeed, it is even possible to buy and sell promises to deliver REDD credits in the future. Again, this is perfectly standard. Fourteen percent of the forest carbon traded on voluntary markets right now are based on promises to deliver REDD credits. But an actual credit cannot exist. Its a small and technical detail. But an important one. A promise of something in the future is very different from saying that one already has it.

Has this Kamula Doso REDD credit been sold? No. Mr Johnson said, "there has been no purchasing of carbon credits under any agreement, they have not been put forward for sale or traded". He concluded, "Carbon Planet is putting forward carbon credits for sale from its contracted portfolio, but only subject to certification by one or more of the recognised standards bodies".

So there it is. The Kamula Doso credit was an "interim" or "symbolic" credit. Which raises the question, why were there at least 40 of these symbolic certificates issued? And how many projects these 40 credits represent around the country. Based on Carbon Planet's investment of $1.2m (AUS) into forest projects in Papua New Guinea, with $100,000 for each programme, there could be up to 12. And where are they? It would be great to find out more. And also to find out how it came to pass that the Kamula Doso project got to such an advanced stage with so many unhappy landowners.

Unfortunately, Carbon Planet tells me that it is no longer authorised to speak to me by Nupan, and is bound by a confidentiality agreement. I've asked if I might communicate with Mr Roberts by email or telephone but have not received any reply.

Mr Roberts, you know how to find me if you want to tell me more about these REDD credits.